The Smurf collection is never complete without Smurfette, so here she is!!  I had a lot of fun designing her and I hope you all enjoy her too!  Fyi, she is one biker babe and she can stand on her own! :) 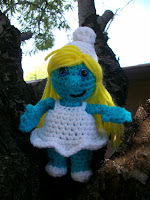 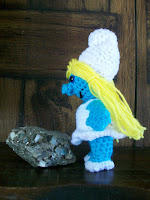 Hair (yellow)
Loop yellow yarn around and around (length isn’t important, just make sure the hair is longer than necessary, then trim later.  In the end the hair should reach down to the bottom of her dress).  Tie the top part of the loop together using a stray piece of yellow yarn.  Cut the bottom of the loop so that you are left with a bunch of hair strands free at the bottom yet connected at the top.  Do this three individual times, creating 3 clusters of hair.  Attach the hair to Smurfette’s head.  I attached the 3 clusters strategically: two facing back and the third to act as her bangs so coming across her head just above the forehead.  For the bang cluster, gather them up so they push out a little bit, then pin to her head where her ear would be.  I tied the hair back slightly from her face to avoid her hair covering her face.

Body Adjustment:
~With a stray piece of turqua yarn, connect to the side middle of Smurfette’s belly.  Take yarn through her body and pull, thinning out her body slightly, kind of like a girdle… oh the joys of being a girl. ;) This will help her look more feminine and help the dress fit a bit better.
~With black yarn, sew on a mouth

Please feel free to ask any questions (in some places it was difficult to describe what I did) or leave any comments. :)  Enjoy!!
Posted by Lurose18 at 4:24 PM