Okay, here he is!!  I've had a couple of requests for an amigurumi Perry the Platypus from Phineas and Ferb...  You've got to love the blank stare of domesticated Perry, which serves as an adorable cover for his real persona... Agent P!  I hope you enjoy having a pet platypus of your very own! 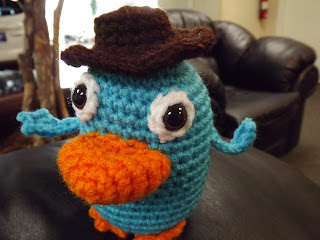 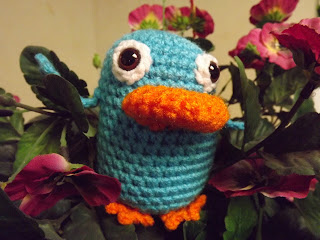 Eyes- white (make two)
6 sc in mc, slip st to connect to first sc.
Finishing: Break yarn, leaving a length for attaching to body.  Push stem of safety eye through the center whole of the ring just created.  Attach the back to the other side, securing the safety eye to the white part.  This will create a white rim around the brown eye.  Attach to body between 6th and 7th round, about 5 stitches apart. 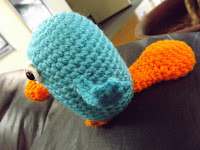 Enjoy!!  Please feel free to post any questions or comments!!  Pictures are much enjoyed. :) 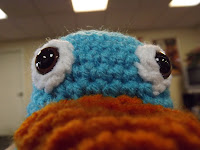 The Little Mermaid has long been one of my all-time favorite Disney movies!  Ariel is brave and adventurous and I love how she collects gadgets and gizmos.  And hey, you gotta love her best friend Flounder.  He is always by her side, no matter what trouble she is going to get into, even if he is a little weary of sharks.  Now you can have your own Ariel and Flounder dolls and see what mischief you guys can get into together! Enjoy!! 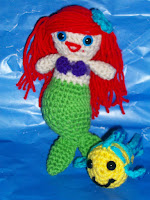 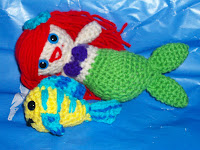 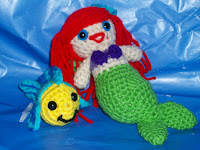 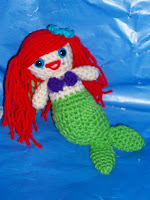 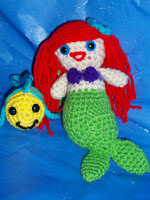 Shell bikini top- dark purple (make 2)
Each shell is made up of a cluster of sc
Ch 2, 4sc in second ch from hook.
Finishing: slip stitch to bind off yarn, weave in stray yarn and attach to bikini top.

Hair- cherry red
Cut 34 pieces of red yarn, 5 inches long. Hold two strands of yarn, fold in half. With top of the head facing, insert hook toward outer of head in free loops on rnd 6, draw the folded end through the stitch and pull the loose ends through the folded end, draw the knot up tightly. Add fringe from one side of head to the back of head and from here to the other side of head.
For the bangs, repeat the process above for three stitches (each holding two pieces of yarn).  This will make the hair reach farther to her face on one side.  Grab the dangling bang hairs and bring across forehead, binding to the other side of her head.  This will make Ariel’s bangs reach across from one side of her face to the other.

Finishing: Assemble all pieces, then embroider a red mouth on her face.

Thanks to K and J Dolls for sharing their free mermaid pattern from which I borrowed a few things and was inspired by for the rest! http://kandjdolls.blogspot.com/2010/11/little-mermaid-free-amigurumi-crochet.html 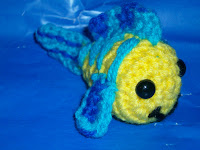 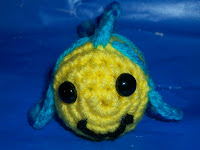 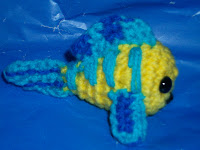 Tail- turqua
Row 1: ch 4, ch 1, turn
Row 2: Inc, sc 3 times, ch 1, turn
Row 3: sc 3 times, Inc, ch 2, turn
Row 4: 2 hdc in next stitch, sc 4 times, sl st to finish
Embroider dark blue stripes to accent the tail
Leave long piece of yarn to attach to Flounder's backside.
Embroider details-
Using long piece of turqua, embroider four “lines” on each side of Flounder’s body, extending from the top fin downward.  Each “line” is made of three lines of turqua, two being the same length and the back one being half as long as the other two.

I hope you enjoy these patterns!  Feel free to comment or leave any questions.  Pictures of your own work are much appreciated!