Last week I went and saw the new Smurf movie.  So cute!!  As I was watching the movie my brain was already calculating how I would design a crochet pattern of my own cute little Smurf.  This is what I came up with.  Hope you enjoy it!!  My niece has requested Smurfette so I hope she will be joining Clumsy soon! 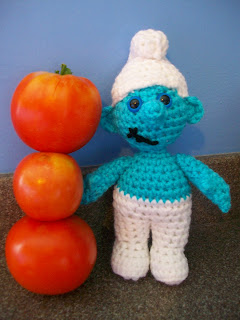 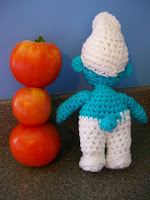 Adjustments:
~ Sew mouth on with black yarn
~ Take length of blue.  Hook to quilter’s needle with knot at end.  Sew one stitch through bottom of nost to just between eyes to make the nose point slightly upward.
~ Optional: sew black eyebrows.

The quote I chose as a description for this blog is "Yes I crochet!  Do I look like an unhip granny?!"  Yet the first post I decide to write about is the hotpad/potholder, which is the ultimate granny crochet project in my opinion.  Despite this, I love hotpads!! They come in handy all the time and they are a fun way to decorate the kitchen.  But mostly, they are a great, semi-quick project that I can mindlessly do while watching a movie.  Oh, hotpads, how well you serve me in my life!! 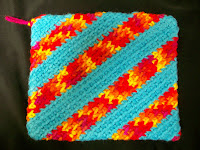 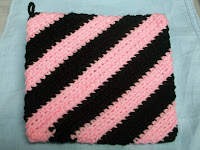 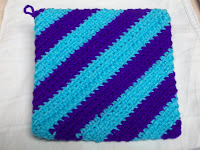 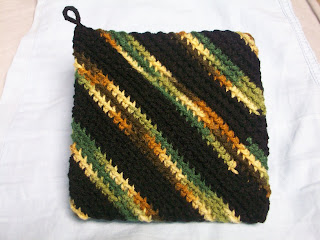 How to make a hotpad:  Make a chain however long you choose (This will be the diagonal length).  When you have chained to the desired length (I usually do 35 chains), chain one extra, turn and do single crochet (sc) stitches back down the entire chain.  When you reach the last chain, single crochet twice in that stitch.  In my opinion, this is where the most difficult step is... sc down the opposite side of the starting chain.  A hotpad is worked in continuous rounds, meaning you will not stop at the end, turn and go back down the previous row.  Continue stitching around and around.  Eventually the work will fold over itself.  Continue stitching until the opposite ends of the most recent row of stitches meets with itself.  When this happens (the hotpad should be more or less square) you will use a quilting needle to whip stitch the hotpad closed.  This makes the work a two-ply hotpad, which means it will be thick enough that you do not get burned while carrying hot things.  To make striped hotpads, simply switch colors after the desired stripe has been made. 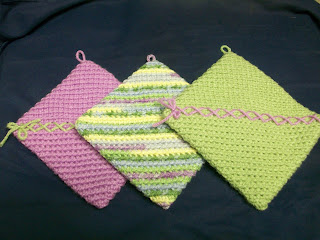